Dr. Tasha M. Hargrove, Dr. Robert Zabawa, and Ms. Michelle Pace
G.W.C. Experiment Station
Tuskegee University
﻿Flint River Farms was initiated in 1937 when the government purchased several large plantations comprising 10,879 acres on 11 different tracts.  The land was then subdivided into 107 farm units averaging 93 acres per unit. Units 17 and 18 were combined, which resulted in 106 units available for participants.  Each unit consisted of a new four-to-five room house, a bar, two mules, an outhouse, a chicken coop, and a smoke house.  Use of electricity was made possible to REA lines: Bored wells, sanitary privies, and fencing were provided for each unit.﻿ 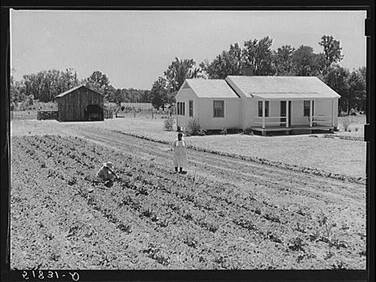 Photo provided by the Library of Congress
Of further historical significance is, that while the majority of the buildings on the project were constructed of wood, two were constructed entirely of special rust-resistant steel metal with the exception of the doors and floors.

Prior to the inception of Flint River Farms, there were 77 families living on the land primarily as sharecroppers and day laborers.  In 1937, all of these families were accepted as participants in the project.  An additional 29 families were also accepted from other plantations.  In 1941, there were 106 families participating in the Flint River Farms Resettlement Project.  For those 106 families, the Flint River Farms Resettlement Project offered hope and an opportunity to become independent landowners.  This concept of landownership was far different from their sharecropping past where they spent long hours in the field with little economic return. 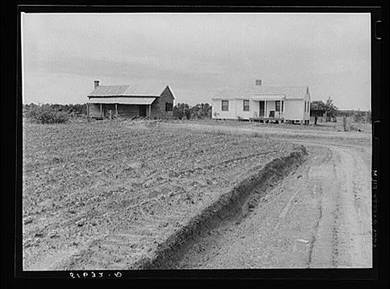 Photo provided by the Library of Congress
"Very few had an opportunity to raise a garden, poultry, or an orchard.  Most of their food had to be bought with their low cash earnings, which often resulted in malnutrition and poor diets.  A bare shelter was all the housing they could expect, and sanitary facilities were few.  Medical care was something they could seldom afford and the death rate was high."

The families were initially required to sign lease-purchase agreements. After a five-year trial period, the families would be given the option to purchase the land. If they were successful at the end of the trial period, the participants would be offered 40-year mortgages at 3 percent interest. In 1943 and 1944, the first group of settlers acquired deeds for their farming units.
Thirty years later, 19 families were still in possession of this land.  Sixty years later, in 2003, 16 of the original participants or their descendants still owned the original farmland.  Of the original 10,879 acres of land, Blacks owned 3,186 acres in 2003.

Initially, the 106 families participating in the project needed assistance in farm planning and management.  According to a report from the Farm Security Administration, the settlers "...needed guidance in planning their farm program - advice on how to avoid the risks of a single cash crop, by diversification and by producing at home as much of their needs as possible; how to conserve the fertility of their soil and reclaim what they could of the eroded acreage.  In other words, to get a new start toward self-support, these families needed not only money but also instruction in better farming practices." 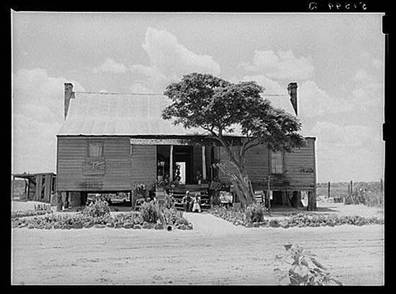 Photo provided by the Library of Congress
An additional important feature of the Flint River Farms Resettlement Project was the "training farm" for young married couples.  This training farm became known as Flint River Farms, Incorporated and was designed to provide hands-on farm training and better opportunities for these young people.  Flint River Farms, Incorporated was operated as a large-scale farm.  It consisted of 1,800 acres of land.  Forty families were selected to live in three residence centers.  "One of the centers provided for twelve families, the others for fourteen each.  A tract of three acres was set aside as the homestead for each family and on each tract there was a five-room house, a smokehouse, a well, sanitary privy, combination barn, chicken house, chicken yard, and a fenced garden.  Flint River Farms, Incorporated was designed in a manner in which the 40 families could work together, while maximizing labor and equipment in an economic manner.  In addition, "each family would receive the highest prevailing cage wage and, in addition, would get more than twice as many days work per year as is now provided on similar plantations and would be provided a homestead unit much better than anything to be found in this part of Georgia."